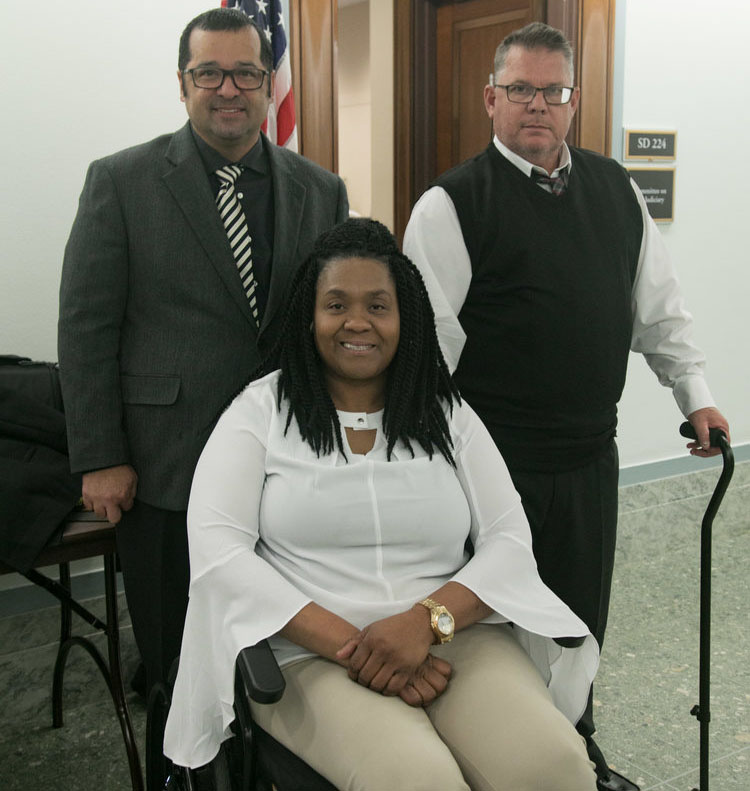 Retired Officer Pete LaBoy (left), Detective Lani Pinkney (center) and Lieutenant Will Rogers (right), all of whom have been injured in the line of duty and have benefited from Code 3 support and advocacy efforts.

The United States takes good care of police officers families that are killed in the line of duty. There are federal and state programs to support those who suffer tragic loss. However there is very little support and in some parts of the United States no support for officers who survive a deadly encounter and are permanently disabled.

Nearly every month in this country 30 officers are shot in the line of duty. There are more that are attacked with knives, vehicles, and other weapons.  Injured Officer Initiative (IOI ) wants to be there to help these families immediately and to prepare them for the future.

Presently, benefits for police officers  who have been injured in the line of duty are managed locally and vary widely from state to state. The Public Safety Officers’ Benefits (PSOB) program, established by Congress in 1976, is the only federal resource available for injured law enforcement officers and the families of fallen officers. This program provides both death and disability benefits to eligible public safety officers who have sustained fatal or debilitating injuries in the line of duty that prevent their return to work. At the time, the receipt of a one-time payment was deemed sufficient to supplement resources provided to injured officers at the state level. However, after hearing the stories of many police officers who have outlived the benefits they’ve received or are unaware of the resources available to them, we believe there is a significant breakdown in our nation’s benefits system for injured officers.

We believe the biggest challenge to public safety officer benefits in the U.S. is the absence of a federally mandated minimum standard of care. Currently, there is a wide degree of variability among state-level benefits available to injured police officers. As a result, police have no assurance they will receive a reasonable level of care if they are injured on the job.

“I was given virtually no assistance from my department or anyone connected to law enforcement. The unfortunate reality is that small police forces are not prepared to help take care of the healthcare and financial costs associated with a law enforcement officer who is severely injured in the line of duty.”

— Retired Lieutentant Will Rogers of the Berkeley County Sheriff’s Office, injured in the line of duty on May 14, 2015

1. We educate injured officers about the benefits available through federal, state and local resources. We provide one-on-one counseling to injured officers and their families about the benefits available to them from public and private sources. Our team of volunteers works directly with impacted families to navigate the complex and often cumbersome process of securing medical, disability and retirement benefits.

2. We equip injured officers with resources to address their immediate and urgent needs. We offer short-term financial support to help relieve injured officers of medical debt, the high cost of daily living aids not covered by medical insurance (e.g. wheelchairs and handicapped vehicles).

3. We empower injured officers to get back to work so they can regain economic independence. Through our academic, corporate and nonprofit partnerships, we identify vocational opportunities that help injured officers pursue new careers so they can become self-sufficient.

We know this problem is complex and cannot be solved with a quick fix. That’s why we’re calling on Congress to take immediate action to address the long-term care needs of first responders.

On January 17, 2018, Code 3 Founder & President Dale Sutherland testified before the U.S. Senate Subcommittee on Crime and Terrorism to advocate for greater support for police officers injured in the line of duty. As a direct outcome of that hearing, U.S. Senator Lindsey Graham introduced new legislation to help close gaps in benefits for injured officers. Appropriately named the Helping Extend Responding Officers Support (HEROES) Act of 2018, the legislation would:

We urge Congress to swiftly advance this legislation to address the urgent needs of injured officers. Our partners in this effort include the International Association of Chiefs of Police (IACP) and the Concerns of Police Survivors (C.O.P.S.) 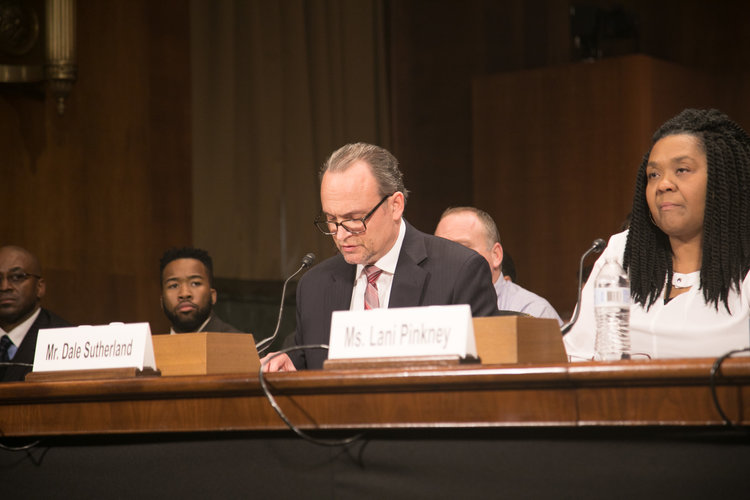 Code 3 Founder & President Dale Sutherland testifying before the U.S. Senate Subcommittee on Crime and Terrorism on January 17, 2018 about the long-term care needs of injured first responders.