DOVER — A parent suspecting their child might have a substance abuse problem naturally wants to intervene and to help, hoping to save their loved one’s life. Oftentimes, however, parents or other caregivers don’t know the warning signs. Those who work with teens battling addiction say the best place to start is in the child’s bedroom.

On Friday, state Sen. David Watters, D-Dover, and Strafford County Sheriff David Dubois welcomed the Rx Abuse Leadership Initiative (RALI) Cares Trailer to Dover, at the Strafford County Complex. Parents and other concerned residents were invited to take a free, educational and interactive tour of a trailer, which is set up as a mock teenage bedroom. They walked through and looked at possible warning signs of drug abuse.

RALI supports programs “that prevent the misuse of prescription medicines so that more lives can be saved from the opioid crisis,” said Paul Young, RALI director. “We do this by bringing together community leaders and elected officials who are committed to finding effective solutions and sharing ideas that will make a difference across our state.”

“The Rx Abuse Leadership Initiative (RALI) of New Hampshire supports programs that prevent the misuse of prescription medicines so that more lives can be saved from the opioid crisis,” said Paul Young, RALI Director. “We do this by bringing together community leaders and elected officials who are committed to finding effective solutions and sharing ideas that will make a difference across our state.”

Joe Abdala, who helped with the tours, is executive director of Code 3, a nonprofit organization formed in 2015, in Virginia, in an effort to improve relationships between the community and law enforcement. Code 3 is partnering with RALI NH.

“A lot of addiction can start with injuries, such as an accident or a sports injury,” said Abdala. “The teens are prescribed painkillers. It escalates from there. No one sets out to become an addict. When the prescription drugs become too expensive, they turn to heroin, which is now cheap and easy to get.

Watters said his son had an injury and was prescribed 30 painkillers. “He took one,” said Watters. “We have a drug registry here in the state and we are looking at prescribing practices.”

Abdala said he understands pain medicine is sometimes needed. He suggested parents take custody of the prescription to make sure it is used properly, and the unused pills are disposed of properly.

Young said RALI NH has partnered with the New Hampshire Hospital Association to distribute Deterra bags as part of the ZeroLeft campaign. The bags contain carbon and when mixed with water and the pills, neutralizes the material which can be safely discarded in the trash. He said coffee grounds will achieve the same effect.

The mock bedroom was set up with the participation of emergency response personnel, who shared what they found when responding to teens who had overdosed.

The biggest surprises were the items a parent would not look twice at. The bedroom contained a can of Coke, a water bottle and a can of Pringles. Each had a false top or bottom that contained drugs and drug paraphernalia, for injecting heroin. Abdala said you can buy these fake items easily, for about $5.

The tour started in the teen’s mock bathroom.

“Bathrooms are a great place to get high, because there is some privacy,” said Abdala. He gave Watters the trash to look through and almost immediately he pulled out a square of foil, stained with drug residue.

Less clear was the Q-tip, with one end missing.

“The users think that the cotton can be used to filter out impurities in the cooked mix,” said Abdala. “They are wrong, but that’s why this one has only one end. This innocuous looking cap here is the end of the syringe plunger. Kids throw away the syringe and the needle cap, but often toss these in the trash.”

Watters said he would not have recognized the small plastic cap as being drug related. He related a personal story about the loss of a family member to substance abuse.

“We have a problem here in New Hampshire with heroin being laced with fentanyl, killing people,” said Watters. Abdala said almost all heroin sold now is laced with some version of fentanyl, making it 50-100 times more potent.

Going back to the medicine cabinet in the bathroom, Abdala produced a spoon with dried on residue, and a toothpaste box that held a syringe and a dose of heroin ready to be used. Antacids, Imodium and Phillips’ Milk of Magnesia sat on the shelf. 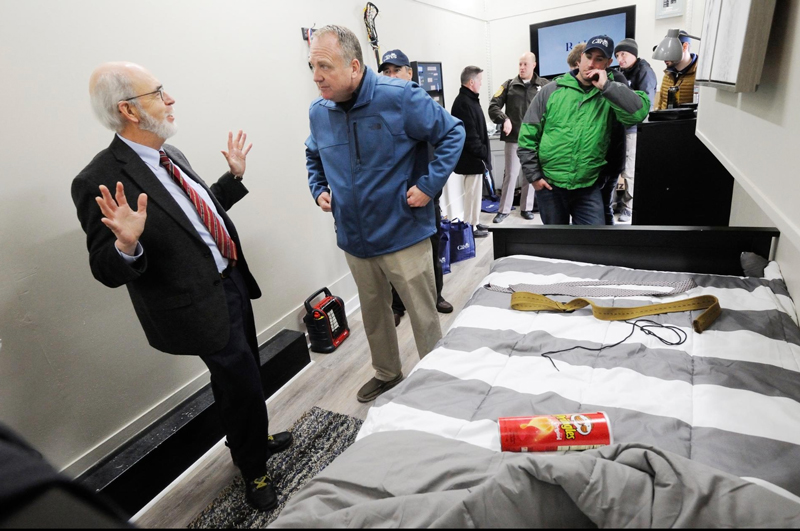 AMHERST – As part of the ongoing battle against fentanyl, heroin and other opioids that are...

Is Your Child Using? Traveling Exhibit Offers Tips To Find Out

Our Stop the Violence New Years event was a huge success.  We sponsored children from all over...

The Project Hope Christmas Party in Fairfax was another huge success and a great time was had by...